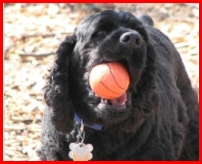 Allen or Linda takes Leaf to the dog park once a day after work or during a lunch break. Often it is only for 20 minutes, but with the throwing of the ball, running, and playing Leaf gets plenty of exercise. He has a blast!

It was Allen’s turn the other day, and the 20 minutes had lapsed, so he was heading for the gate. Only one lady and her small dog were left in the park. The dog had medium length white hair and looked like a terrier mix. They would be alone after Allen and Leaf’s departure.

Normally Leaf runs to the gate when it’s time to leave. He carries his ball in his mouth and looks ready to go home and enjoy a nap. That day, though, he stood about twenty feet from the gate near the other dog. Up to that point he had mostly ignored the dog.

Feeling an inner nudge Allen decided to close the gate and see what would happen. He walked over to the lady, and she started talking about this dog named Murphy whom she described as newly rescued only 24 hours ago. Murphy looked traumatized, scared, and alone even with the woman’s constant reassurance that he now had a forever mommy. Since the time when she had adopted him, Murphy had been so distraught that he had not yet gone to the bathroom.

Murphy looked at Leaf running after his ball once more. His expression conveyed that he wanted to join in the play. Allen bent down and said, “Murphy, you look very handsome.”

Murphy came over and gently touched his noise on Allen’s hand. Allen then rolled Leaf’s orange ball, and Murphy ran after it. Then he stopped after running five or six feet and hurried back to where his mommy sat. The lady was so happy to see Murphy play and praised him for chasing the ball.

Leaf sat, watching this scene. His tail wagged with energy. He came up to Murphy, and the two dogs stood nose to nose for at least thirty seconds with both of their tails wagging. Leaf seemed to sense that it was still too early for him to play with Murphy. Any sudden movements from him would scare the timid dog even more.  But they had made a dog-to-dog connection.

After Allen talked about Leaf’s past some with Murphy’s new mommy, she seemed reassured that healing would take place. She watched Leaf’s healthy and strong personality as he chased the balls Allen threw and strutted around the dog park.

The lady said, “Murphy has a bright future in front of him. He will be spoiled, loved, and safe in his new home.” Allen told the woman about a great doggy daycare in the neighborhood that has helped Leaf be more socialized and also to heal.

Allen and the woman watched as a more relaxed Murphy walked a few feet away to a grassy area that Leaf had used earlier for his restroom needs. Murphy sniffed, circled the area, sniffed again, and at last, was relaxed enough to eliminate.

At that point Leaf seemed to know that his gift of love had been received. He had played with the scared dog, refusing to leave the little fellow alone in the dog park. The concern the dog’s human had expressed over Murphy’s physical needs had now been answered by the call of nature.

Allen and Leaf walked to the gate once more. Leaf carried his orange ball in his mouth.  They both knew that now it was time to go.

When have you seen a dog or other animal give service to an animal in need?