TODAY ONLY — Discover secrets to having a spiritual bond with your dog. Listen to a short interview featuring Allen Anderson, author of “A Dog Named Leaf” by visiting “The Author Show” website at http://www.wnbnetworkwest.com/WnbAuthorsShow1.html . The interview will be available for listening anytime TODAY, Thursday, August 22 only. So don’t miss it. Are you ready to hear the truth?

The General Mills Employee Club Wellness Committee sponsored our workshop “Saying Goodbye To Your Animals” based on the book by us (Allen & Linda Anderson). It was a heartfelt workshop. Attendees seemed to benefit from discussing practical ways to healthfully grieve and heal after pet loss. 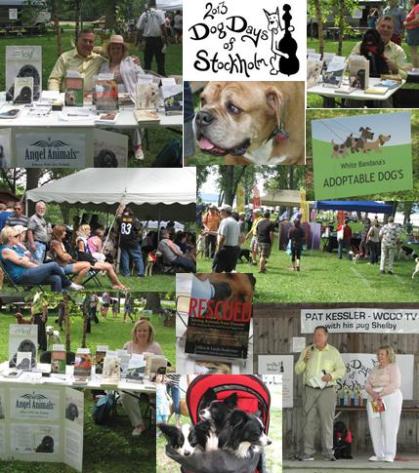 We enjoyed our time at the 4th Annual Dog Days of Stockholm as guest speakers. The daylong dog adoption event was well attended with many dog lovers traveling to the beautiful riverside village of Stockholm, Wisconsin. Booths with rescue groups and animal shelter volunteers and the dogs who needed homes lined the perimeter of the event.

In addition there were pet related booths, dog demonstrations, stirring speakers, and a variety of activities such as a Blessing of the Animals by a local pastor and contests: Best Dressed, Best Trick, Looks Most Like Owner, Best Dog Name, and Best Dog Hairdo.

Pat Kessler from WCCO TV in Minneapolis was the MC. He had a lot of help from his pug Shelby. Pat did an incredible job of keeping the program’s pace just right with his genuine love for dogs, great sense of humor, and spontaneity.

Our little cocker spaniel Leaf was sweet and adorable. We gave him our “be nice” talk before arriving at the event. Leaf tends to be a dog who has his own thoughts about who he wants and doesn’t want to meet. We asked him to be nice to everybody — people and dogs — and promised to make sure everyone was nice to him.

We were happy to watch him let everyone pet him without any of his editorial comment. He squealed once when someone squeezed his long floppy ears — something that must hurt a sensitive cocker spaniel. His only slip-up was backing off from a young woman dressed in a fairy costume with wings. She must have looked strangely non-human to a dog who thrives on everything being “normal.”

Leaf wagged his tail with enthusiasm, when those who had read A DOG NAMED LEAF came over to admire him. We wondered if he is becoming accustomed to his new role as a doggy celebrity. He was a real trouper all day and slept soundly for hours after we came home.

The three of us (Leaf, Linda, and Allen) spoke onstage to the crowd. Leaf stood in the middle, receiving sliced apples (his favorite treat). At one point, we all seemed to be looking at someone in the audience with our heads pointed in the same direction.

When have you asked your animal companion to go the extra mile and been rewarded with having your request filled?