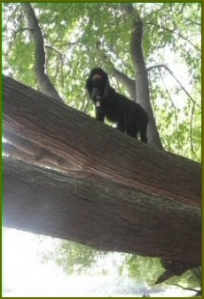 LEAF IN A TREE

“Oh, my God! There’s a dog in the tree!” one of three teenage girls yelled with disbelief, as the trio walked past us. When they saw the dog, the other two teens called almost in unison, “Oh, my God!” as they all gawked upward.

Our cocker spaniel Leaf and we were at our regular Saturday morning spot, sitting on the soft white sand, viewing the great Mississippi river as it slowly flowed past. This was our quiet time to reflect on our week and what lay ahead.

Our Saturday spot is in the middle of 12 acres of a heavily wooded forest with many walking trails–all existing for dogs. It has an official name, but we call it DOG PARK HEAVEN, the BEST dog park ever.

Near where we always sit on the beach, a large fallen oak tree with ample branches thrusts toward the river. The incline is low enough that Leaf feels comfortable climbing upward, high onto its limb. Upon reaching his destination, he lies down on the thick branch. Then he places his most precious procession, an orange bouncy ball, between his two front paws. With the ball in its proper place, he relaxes and observes all the activities beneath him. This is HIS spot where no dog or human can reach him.

As the people and their canines strolled down the beach one Saturday, some, like the teenagers, noticed Leaf. Most of the time people made their statement about the dog in the tree in a monotone voice as if trying to be cool about such a strange sight. It was as if they were saying, “The tree has leaves.”

Some asked, “Is that your dog?” Linda replied, “Yes, he likes heights. He must have been a cat in a previous life.”

With those additional details each person continued to stare at Leaf as he or she slowly approached the tree. With a slight moment of hesitation, they continued walking under the branch while Leaf looked down at them, probably thinking, “They won’t get my ball.”

A few times, passing dogs would also look skyward and see Leaf. Some glared at him when they realized he was not a squirrel. The big dogs looked horrified that a smaller dog would dare be higher than they. “It’s just not natural,” they seemed to be thinking. Other dogs noticed that Leaf had something between his paws. Could it be a ball?

With perfect timing, suddenly and with purpose, Leaf repeatedly showed the dogs that he, in fact, had his own ball. “See! Look at me! Mine!” While he actively chomped on his ball, no canine considered taking the challenge of climbing high to swipe it.

Maybe people were double-checking to make sure what they saw was real and could now be part of their expanded worldview of what dogs do. Maybe the dogs looked back at Leaf to ponder a day when they might get the ball Leaf guarded. After all, it was as if he was mocking them by proudly displaying his prize.

As it turns out, Leaf had a plan of action outside of teasing the dogs below him with a ball they could never capture. He wanted to show off how macho he was or maybe display his intelligence. Using advanced strategic planning, he carefully evaluated potential foes. With amazing timing he threw his ball downward to the beach as his chosen mark approached.

Leaf chose dogs who were totally unaware of his presence above them. With delight and ecstasy, the dogs couldn’t believe their good luck. A ball had dropped from the sky, a gift from the heavens, a toy to enjoy. This was truly DOG PARK HEAVEN!

At the chosen one’s moment of greatest gratitude and vulnerability, Leaf swooped down from his high perch, also appearing to have fallen from the sky. Eye-to-eye with the chosen canine, he quickly chomped on the orange ball and ran with it back up the tree. There, he safely watched the dog’s disappointment and bewilderment that the unexpected gift had been taken away only seconds after being offered.

As we relaxed at our spot on the beach, watching The Leaf Show, dogs slowly walked over to us to say hello. We gentle caressed their heads or ears and told each of our visitors how beautiful he or she was.

This game Leaf played with unsuspecting dogs continued for weeks until one Saturday when we all experienced a profound change. As usual, Leaf displayed his total joy in being back at Dog Park Heaven. We slowly walked down the long winding trail to the Mississippi river and found our regular spot. While we sat in the soft cool sand, Leaf climbed his tree, holding his orange ball in his mouth and rooting himself into his high spot. All was right with the world.

Soon after we relaxed, one dog, then two, then four rushed over to scale Leaf’s exclusive tree branch. Word had gotten out. Was this a dog version of text messaging or inner social media, ending up with a flash mob? Leaf’s personal domain now had uninvited visitors. Big dogs, small dogs, wet and dirty dogs of all sizes formed packs and were invading HIS tree. Tensely he gripped the ball in his mouth, guarding it against those who dared occupy his branch of safety and personal refuge.

Consciousness had expanded. The traditional dog park with noses sniffing close to ground had vanished. Traditional canine experience was no longer limited. Humans were delighted and amazed that their dogs could now go high. With nervous laughter they said things such as, “Look at her! I didn’t know she could do that!” Placing limitations on their companions was no longer as easy as previously.

Leaf too had to become accustomed to a new dog park reality. Observing the world from above can be fun but his high spot was no longer unreachable. As a result, he began coming down to earth more often to mix it up, play with other dogs, and have us throw his ball to chase and retrieve.

What did the three of us learn?

Sometimes life breaks through seemingly unbreakable boundaries we have place upon ourselves — fixed notions of what individuals are capable of doing and being. Yet neither dog-made nor man-created limitations are absolute.

What have the animals in your life taught you about possibilities?

Visit <http://www.angelanimals.net/nlimage118.html&gt; to view Leaf in a tree.

This site uses Akismet to reduce spam. Learn how your comment data is processed.